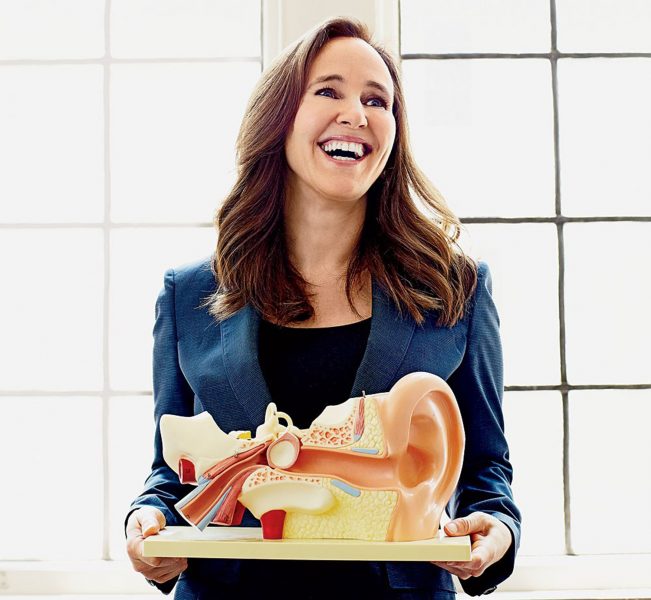 Parent talk is probably the most valuable resource in our world. No matter the language, the culture, the nuances of vocabulary, or the socioeconomic status, language is the element that helps develop the brain to its optimum potential. In the same way, the lack of language is the enemy of brain development.
– Dana Suskind, Thirty Million Words: Building a Child’s Brain

Dana Suskind (born on 7th April 1968), is a Professor of Surgery and Paediatrics at the University of Chicago Medical Center; where she is the director of the Paediatric Hearing Loss and Cochlear Implant program. She has dedicated her research and clinical life to optimising early human brain development and preventing early cognitive inequalities and their lifelong, negative impact.

Dr Suskind has often said that she believes the role of a physician/ surgeon is not just to perform surgery or prescribe medication, it is to make the world a better place. Making the world a better place started for Dana in the operating theatre, where her work as a paediatric cochlear implant surgeon led her on a journey of discovery. Cochlear implants give children who are born deaf the ability to hear and thus to talk and learn. However, Dr Suskind observed huge differences in progress following surgery, despite the implanted children seeming to have equal potential and loving parents who want them to do well. Some really thrived, whilst others did not.

Through examining myriad studies and literature, she realised that the ability to hear was not enough. It was the quality of the learning environments and language experiences in the first three years of life that caused significant learning inequalities. She also observed that these differences applied to both hearing and deaf children, with children from disadvantaged backgrounds at greatest risk. Dr Suskind realised that the key to learning success, was how and how much, parents talked to and interacted with their children and that the quality of that interaction, not only built vocabulary but most importantly a child’s foundational brain structure.

Recognising that parents are inexorably the architects of their children’s brain development and that the challenges observed in her patients reflected the population at large, Suskind began developing an innovative, evidence based intervention, to help families enable their children, to reach their full potential. The foundation of her programme is to help parents enhance their home language environment, thus strengthening their children’s ability to learn. This gave birth to the Thirty Million Words® initiative, which has reached more than 3,000 families in the Chicago area.

The concept of Thirty Million Words arises from a famous study conducted approximately thirty years ago by Betty Hart and Tod Risley. Their study raised awareness of the impact of poverty, stress and culture on how much parents interact with their children. Researching a group of children ranging from zero to three years, from all socioeconomic backgrounds, Hart and Risley found that by the end of their third year, children from low socioeconomic backgrounds will have heard thirty million fewer words than their more affluent peers. This also correlated with differences in IQ and test scores by the ages of eight to nine. Determined to broaden her programmes reach, Suskind recognised the need for a community wide and population level approach. In order to bring this vision to fruition, she began a collaboration with Dr. John List, a Professor of Economics and a leading global economist known for using field experiments combined with behavioral economics, to solve social issues. At the time, Dr List was researching early education for children aged three to five. His research involved experiments in real-life settings.

Building on their shared principles, expertise and Suskind’s Thirty Million Words early work, Suskind and List established the TMW Center for Early Learning + Public Health; a joint venture between the University of Chicago’s Biological Sciences and Social Sciences Divisions. The goal of the centre was to create a population shift in the knowledge and behaviour of parents and carers in order to optimise foundational brain development in all children, particularly among those growing up in disadvantaged households.

In 2015, Suskind published Thirty Million Words: Building a Child’s Brain. Her work and that of Thirty Million Words® and the TMW Center, have been reported by numerous media outlets, including the New York Times and The Economist and have received generous funding from a variety of benefactors including The US Department of Education, PNC Foundation and The W.K. Kellogg Foundation.

Dana Suskind has also received several awards for her work, including the University of Chicago Medical Faculty Award for “Distinguished Leader in Program Innovation”, the Alexander Graham Bell Association for the Deaf and Hard of Hearing Chairman Award, the John D. Arnold, M.D. Mentor Award for Sustained Excellence from the Pritzker School of Medicine, the Vision and Impact Award from Weizmann Women for Science, and the Society for Ear, Nose, and Throat Advances in Children (SENTAC) Gray Humanitarian Award.

In 2018, Suskind and List married. They live in Chicago with their eight children, from previous relationships.

Dana Suskind, sums herself up as a passionate working mother.

If you want more information on formative brain development or working in early years development, you may find the following useful: