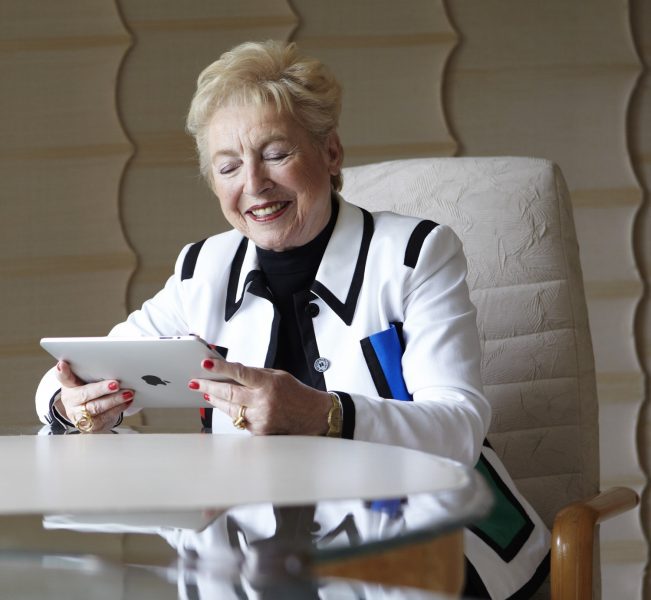 “People remember entrepreneurs because of our successes but… it depends far more on how we deal with failures.”
Steve Shirley

Dame Stephanie “Steve” Shirley, DBE, FREng, FRSA, FBCS, is a British information technology pioneer, businesswoman, mother and philanthropist. A true British icon, she is a living example that with drive and belief you can do anything, despite the odds. Born Vera Buchthal to a Jewish father, a judge in Dortmund who was relieved of his duties during the Nazi regime and a non Jewish mother. In July 1939, at the age of five, together with her nine year old sister, Shirley travelled to England, as an unaccompanied child refugee and placed in the care of foster parents.

Stephanie always considered herself extraordinarily fortunate. A million Jewish children died in Europe during the Second World War and she was one of the 10,000 who managed to escape to the UK, via the Kinderstransport.

“The fact that I almost died in the Holocaust means that I’m motivated to make sure that each day is worth living that my life was worth saving. I was determined not to let other people define me, to break through, to build something new and to not be put off by the conventions of the day.”

Proving to be a bright child, Stephanie had a love for and considerable aptitude in mathematics. In order to study the subject, which was not taught at her girls’ secondary school, she was given special dispensation to attend lessons at the local boys’ school. At the age of 18 (in 1951) she became a British citizen and changed her name to Stephanie Brook – her surname taken from her love of the work of the poet Rupert Brooke.

Dame Stephanie also began her IT career in 1951 at the Post Office Research Station in London, a government facility that played an important role in the burgeoning telecommunications and computer industries. Its engineers (amongst other things), introduced the world to the speaking clock, developed the transatlantic telephone cable and built the world’s first programmable electronic digital computer, Colossus, which was used for code breaking at Bletchley Park, during the war. At a time when computers were for the first time being used to manipulate vast amounts of data, Stephanie built computers from scratch and wrote machine code. At the same time, she took evening classes (for six years) and achieved a degree in mathematics.

In 1959 Stephanie got married and left the Research Station, as she felt it best that she didn’t work at the same place as her husband, a physicist working on wave guides. She then joined Computer Developments Limited (CDL), where she worked as Chief Programmer, managing a small team.

After hitting the glass ceiling in both government and industry, in 1962, with £6 in founding capital, Stephanie started her own business – Freelance Programmers. At that time, software was not recognised as a product in its own right, it normally came packaged with the hardware as the belief was that businesses would not pay for it.  However, Shirley the entrepreneur knew differently.  Through her experience in both government and industry, she recognised that there was a need for programmers who could develop good software that would unleash the full potential of the expensive hardware. This meant that people who could programme, would be essential.

Shirley also knew that British industry and government, through deliberate sexism, were intentionally discarding the most important workers of the emerging computer age; the majority of their existing workforce, capable and talented women with programming skills.  This calculated exercise, effectively starved the UK computer industry of the critical labour it desperately needed, damaging the progress of every industry that used computers, the modernisation projects of the public sector and most strikingly and irreparably, the UK computer industry itself.

In this hostile employment environment and at a time when women weren’t allowed to work as bus drivers or airline pilots nor obtain credit or open a bank account without their husband’s permission, Stephanie was quietly building one of the most cutting edge and socially progressive companies in the country.  Her approach was revolutionary, utilising a proportion of the wasted female talent, she provided highly skilled, flexible, family friendly jobs for women with dependents.  From 1962 to 1975 Freelance Programmers almost exclusively employed women working from home, as software engineers. Two hundred and ninety seven of the first three hundred employees were women.  However, when the UK introduced workplace discrimination legislation in 1975, Dame Stephanie, somewhat ironically had to start employing men. Freelance Programmers went on to employ 8,500 people and following the company’s stock market flotation, more than 70 employees became millionaires.

In a male dominated business world, in order to improve the probability of positive responses to her marketing letters, Stephanie resorted to signing them with her nickname, Steve. Her team of talented women, ultimately provided software development and consultancy services to the government and major British companies, on a range of projects from payroll and accounting, to cutting-edge assignments like software for underwater weapons research and programming the “black box” flight recorder for the world’s first commercial supersonic jet, Concorde!  Company standards were such that they were ultimately adopted by NATO and the Department of Health. As Dame Stephanie has remarked, “who’d have thought that the programming of the black box flight computer of the supersonic Concorde, would be done by a bunch of women in their own homes?” Retiring in 1993 to concentrate on philanthropic work, Dame Stephanie has given away most of her estimated £150 million wealth. She continues to give to a range of causes including autism research, a cause close to her heart as her late son Giles had autistic spectrum disorder (ASD).  Stephanie is also adamant that some of her wealth should go back into the technology sector. She founded the Oxford Internet Institute, which focuses on the social, legal and ethical issues of the Internet.

Dame Stephanie was appointed Officer of the Order of the British Empire (OBE) in 1980 and Dame Commander (DBE) in 2000. In 1987, she gained the Freedom of the City of London. She was President of the British Computer Society from 1989 to 1990. In 1985, she was awarded a Recognition of Information Technology Award.  She received the Mountbatten Medal in 1999 and was appointed a Fellow of the Royal Academy of Engineering in 2001.