Is equal pay a million miles away? 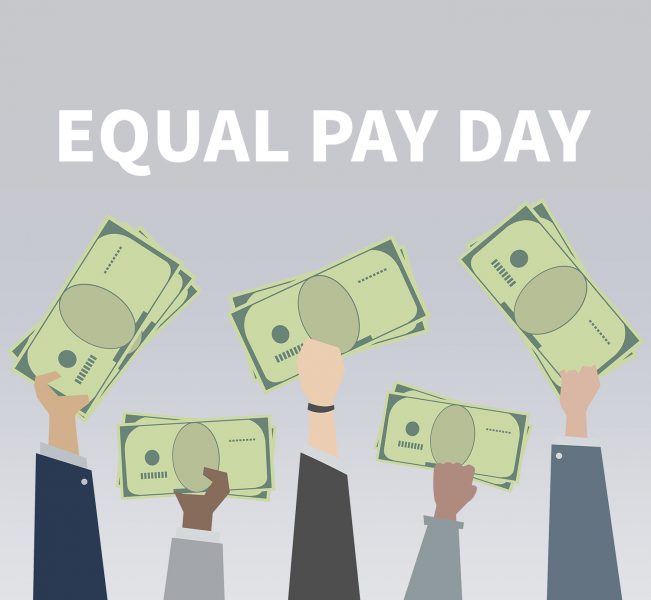 The campaign for equal pay has a long history and is still on going.

When I started work in the late 60s, the gender pay gap was not paramount in my mind.  I was moving from rural Wiltshire to London, at that time an exceptional step for a young woman to take on her own.  Whilst we did have a burgeoning feminist movement and the ‘swinging sixties’; for most women the only swinging that took place in the 60s, swung right past us.  Most of us did not leave home until we got married and when we did, it was usually to somewhere fairly close to home.  Given this, my concerns were more parochial, ‘will I cope, where will I live and how will I manage on the Tube’?  Little did I realise that my ‘adventure’ would lead to greater political awareness and taking part in an ‘equal rights’ march through London!

I went to work in Lombard Street; unsurprisingly for one of what is now ‘the big four’ banks.  Initially I was more concerned with settling in, learning the job and making friends.  Little by little, things started to irritate, like not being able to wear trousers to work but very short skirts and ‘hot pants’ were OK!  There was a strict hierarchy, even down to different dining rooms for different levels of staff and the sacrosanct status of the Chairman’s lift (inevitably a ChairMAN), which could not be broken, even if there were queues of people waiting – needless to say I did use it one day, but that is a story for a different time!

Working in Personnel (HR to you!), meant I had access to information that was hidden from most.  I was responsible for amongst other things collating information from appraisals, salaries and bonuses as well as very low interest staff loans and mortgages – these loans and mortgages were a significant perk and the reason many people chose to work for a bank.  What I quickly began to realise was that the disparity between male and female employees, over all these areas, was significant.  At a time when the epitome of career suicide for a woman was to come to work wearing an engagement ring, appraisals for female employees were wholly focussed on their competence, with very little on progression.  As a woman you could be working next to a man doing fundamentally the same job, at 40% less salary and you definitely could not expect to get the same bonuses (if at all)!  With regards to loans and mortgages, most women were precluded from the mortgage scheme – unless they were too old to have children and of course, they remained unmarried!  The availability of staff loans was also significantly limited by long standing assumptions about a woman’s place.  On one occasion I was told to refuse a female member of staff a loan for a car, “because it was her husband’s responsibility to provide the family car”!

All this 80 years after Clementina Black a writer, social reformer and a leading light of the Women’s Trade Union Association, moved an equal pay motion at the 1888 Trades Union Congress.  Twenty two years later in 1910, the Women Chainmakers of Cradley Heath formed a trade union and following a 10 week strike, won the UK’s first minimum wage agreement.  Significantly more startling, was that their action was instrumental to increasing the wages of the poorest workers by 150% and even after 110 years, remains one of the most inspiring tales of the struggle for a living wage.

Whilst they were not the first to make a stand, it is universally accepted that the 1968 women machinists strike at the Ford Dagenham factory, following the discovery that they were being paid 15% less than their male colleagues for doing the same work and as skilled workers, were even paid less than male toilet cleaners and store workers, was the catalyst for the 1970 Equal Pay Act – which has now become part of the 2010 Equality Act.  This Act for the first time in the UK enshrined the right to pay parity between women and men.  It gave individuals the right to the same contractual pay and benefits as people of the opposite sex in the same employment.  Prior to this, it was common practice in the private and some parts of the public sector to have separate and lower women’s rates of pay e.g. there were separate pay structures for the same roles, levels or grades for men and women.

132 years since Clementina Black’s 1888 TUC motion and 50 years following introduction of the Equal Pay Act we are still struggling for equality.  The World Economic Forum (WEF) suggests that at the current slow rate of progress, it could take between 100 and 227 years to eradicate gender inequality, worldwide.  In fact, the UK appears to be going backwards, we dropped six places in the WEF rankings for gender equality, despite successive governments promising to tackle gender imbalances in British society.  The UK has dropped from the 15th most equal nation in the world to 21st, with Albania, Canada, Costa Rica, Latvia, Switzerland, South Africa and Spain all moving ahead of us.  The WEF also found that due to big differences between men and women’s earned income, the UK is also failing to improve our persistent economic gender gap, putting the country at 58th in the rankings.  Men dominate sectors such as AI, engineering and computing and many more women than men work part-time.  However, the landscape is not all bad; there are several areas where Britain is in joint first place, including literacy, enrolment in tertiary education and the numbers of professional and technical personnel who are women.

According to this Fawcett Society Report  produced in conjunction with the Global Institute for Women’s Leadership and the Thomson Reuters Foundations, the gender pay gap in Britain remains among the highest in Europe with women earning 16% less than men, despite the fact that the gap has narrowed in recent years, particularly for younger age groups.  The effect of part time work is particularly pernicious.  Women are three times more likely to work part time than men.  The importance of this statistic cannot be underestimated, because it’s not just that part time workers get paid less because they work less hours, they actually get paid less per hour!  Furthermore, whilst part time wages keep pace with average earnings growth, part timers do not progress up pay scales. As a result the prevalence of part time working among mothers plays a significant role in the overall gender pay gap and why it widens after children are born.

The Institute for Fiscal Studies (IFS) has identified that the mean gender pay gap is about 8% before children are born and then widens to around 30% by the time the eldest child reaches 20.  During this time, mothers spend on average 10 fewer years in full time work than fathers, and seven more years in part time work.  The researchers define full time work as working at least 25 hours a week.

Counter intuitively, the difference is even starker among those with degree level qualifications.  For this group, there is a 4% gender pay gap before men and women start to have children. This widens to 30% by the time the eldest child reaches 20.  The IFS concludes that most (circa 20 percentage points) of this eventual gap, can be accounted for by differences in labour market experience between men and women that emerge after childbirth, and in particular by the lack of pay progression in part time work.

At 17 I was asked by a male friend of my parents, why I was continuing my education as I was only going to get married and have children!  My smart response was that “If that is the case, then if you educate a woman, you must educate a family”.  A statement which to this day, I firmly believe, however, I also believe that a woman can do anything she sets her mind to both inside and outside the workplace and that there should be no such thing as ‘woman’s work’.  Sadly, more than 50 years on from the above encounter, we still have jobs that are more likely to be done by men and those that are done mostly by women.  This is not just conjecture; the official statistics back this up, there are still more men in better paid senior and managerial jobs and more women in lower paid sectors like caring and administration.  Given this disparity, it is no wonder we still have a significant gender pay gap.

Why do more women end up in the lower paid jobs?

The reason is not wholly clear; it could be for myriad reasons.  Is it from positive choice or a choice forced by circumstance?  There are many causes that determine the jobs we end up in.  It could simply be the state of the labour market and the jobs that are available, family circumstances can play a major role and many, many more.  Culture also plays a role; there is still a pervasive image of what society sees as appropriate jobs for men and suitable jobs for women.

Who would have guessed, age is a factor in the gender pay gap!

It is incongruous that as a country we appear to be losing rather than gaining ground in the equality stakes; given that it is proven economic good sense to increase women’s participation in the labour market, by removing barriers to their ability to earn equal pay to men.  Therefore, it is clearly a fiscal imperative that we up our game in the UK by not only improving the lot of part time workers, but also by eliminating the idea of ‘women’s work’, as well increasing access to occupations traditionally thought of as ‘for men only’.  According again to the Fawcett Society, increasing female participation in the labour market could increase our economic worth by between £15 and £23 Billion or 1.3 to 2% of GDP.

If ‘money really does talk’, why are we not listening?

Take a look at the Fawcett Society information: Equal Pay Day 2020 (the day in the year when women effectively, on average, stop earning relative to men)