Sleep Walking into disaster, 2020 a tumultuous year, a year of Heroes, Villains and Clowns

When we celebrated New Year’s Eve on 31st December 2019, most of us were either barely aware of, or in most cases totally unaware of the disease that was to become an overwhelming part of our lives in the year to come.  Many of us, who were aware, were complacent because previous viruses such as SARS and MERS had not had their predicted global impact and many thought Covid-19 would be the same.  Effectively, this complacency saw most of the world ‘sleep walking into disaster’.

A disaster for all a tragedy for many

The pandemic has had a destructive impact on many countries, but some more than others.  The UK, despite sufficient warning and considerable advantage in resources and scientific expertise, fell at the first hurdle and is still floundering.  Several other countries that had similar advantage have also fared poorly either through complacency, ‘rabbit in the headlights’ inaction, negligence or in a small number of cases what has been coined as, toxic masculinity.

On 23rd March 2020, with Covid cases surging, the UK government finally grasped the nettle and put the country into Lockdown.  This placed restriction on the public, preventing us from leaving home except for limited reasons, including not travelling for work except when absolutely necessary.

The fortunate (either due to their job or their wealth) could sit out the Lockdown (and subsequently) in ‘splendid isolation’.  We all, however, relied upon the many who manned the barricades in our hospitals, care homes, supermarkets and other essential services.  These often unsung heroes continued to risk their health and lives, when the majority of us were avoiding even our nearest and dearest, for safety. 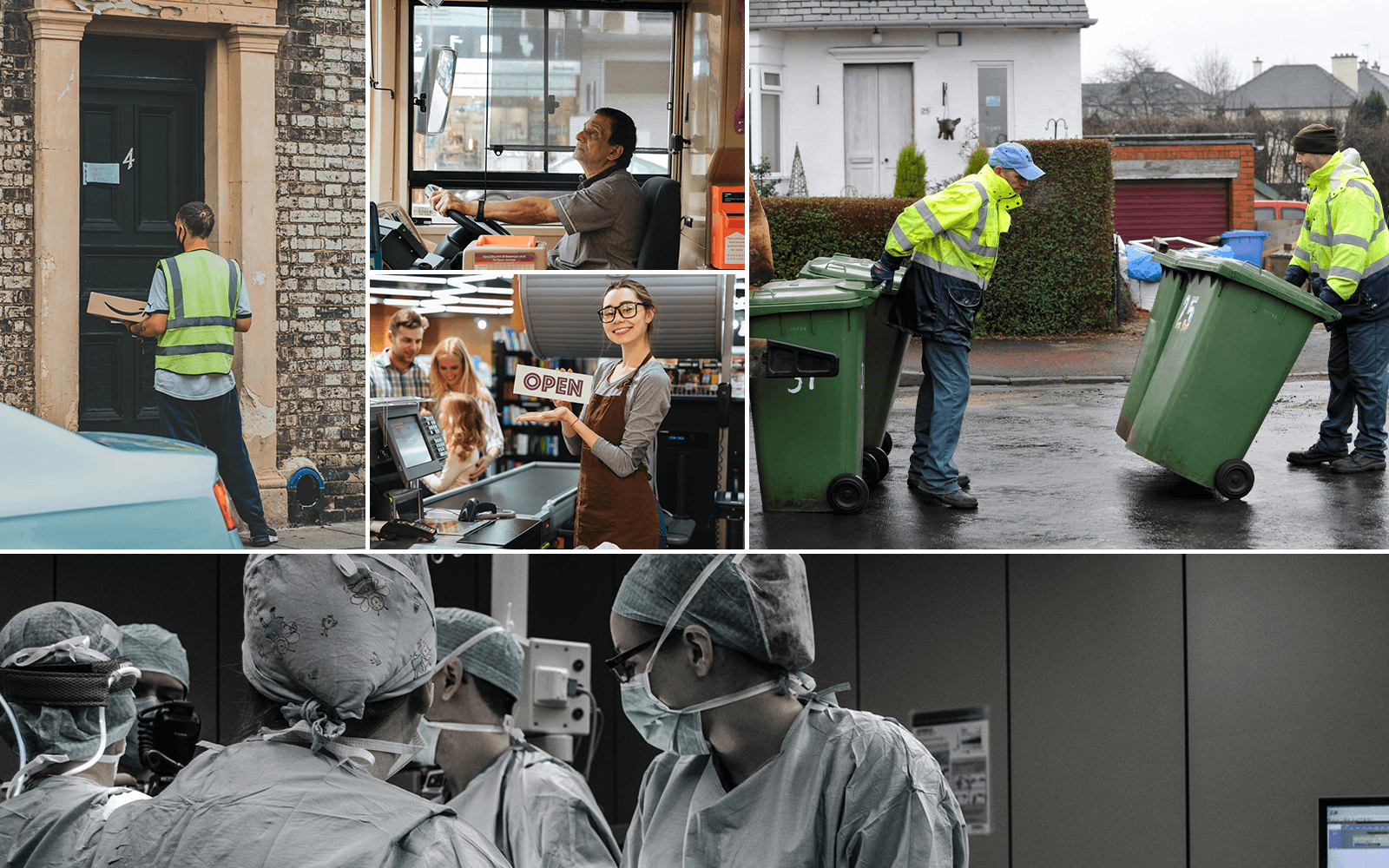 Some of these heroes are more easily identified and higher profile than others, doctors, nurses and carers.  However, we must not forget people like bus drivers, delivery drivers, refuse collectors, teachers and shop assistants (be it in supermarkets or otherwise) – jobs that we cannot survive without.  These frequently low paid and often held as low value contributors to society proved their worth, for it is unimaginable to think of the consequences for us all, had they prioritised their own personal safety over performing their jobs.

According to a study by Autonomy an economic Think Tank, of the 3.2 million workers employed in the highest risk roles – because they normally work closely with the public and people with diseases and infections – about 2.5 million (78%) are women; even more marked is that 89% of nurses and 84% of care workers are women.  Also according to the study, as many as a million of those workers are also among our lowest paid!  Could this demographic be why the bed rock roles within our society, those roles that we rely on to keep our basic services and our care facilities running, are apparently so economically undervalued?

The Villains and Clowns

I have combined these two as it is not always clear under which category, the offenders should lie.

We have all read in the press about leaders who refused to heed the science or promote common sense responses, who responded with too little too late or did not respond at all.  Of individuals who flouted the rules, deciding that they applied to others and not to them.  The characters who thought it funny to cough in someone’s face or who aggressively jumped the queue to get into the supermarket first.  Those who cleared the shelves of product and produce, stockpiling at the expense of others, in particular at the expense of those who could not afford to do the same.  Of company leaders who increased their fortunes, whilst at the same time failing to provide sufficient recompense and more importantly safety for their workers!

The disproportionate effect on women and in particular mothers

Whilst many male dominated sectors have suffered in 2020, it would seem that the impact on women and in particular women with children has been much more significant.  The long term effects will manifest in time; however, evidence already suggests that women’s earnings and employment have been particularly hard hit.  By May, it was clear from the statistics produced by the Institute for Fiscal Studies (IFS) that mothers were 1.5 times more likely than fathers to have left or lost jobs during the pandemic.  Also recent research by the Women’s Budget Group (WBG) indicates that women make up the majority of those who have been furloughed in every UK region except the West Midlands, with young women aged 18-24 most affected.

The concern is that the pandemic could have a long lasting effect on gender financial equality.  The reason for this disparity of impact is not simple or wholly clear.  A particular element is that women were more likely than men to work in organisations and roles that completely shut down during the spring lockdown.  In particular lower paid women have been most affected by cuts in working hours.  The other ‘elephant in the room’ is childcare!  Before Covid, UK mothers already performed 60% more unpaid work than men.  A significant reason why sectors such as high street retail and health and beauty are dominated by women, as well as being the majority of workers on part time and zero hours contracts, is because these roles make accommodating caring responsibilities, much easier.

The undisputed fact that women do the ‘lions share’ of unpaid care is inextricably linked to the amount of time they can spend participating in paid work.  This also extends to women feeling they have no option but to work in jobs they are overqualified for after having children, to allow them to work more flexibly.  What is even more undisputable, according to research by King’s College London, is that women have borne even more of the caregiving during the pandemic.  According to the TUC, this was fundamentally due to school closures combined with a Covid generated crisis in the childcare industry.  Additionally, a survey of almost 20,000 women reveals that increased childcare responsibilities have had an exponential effect on women’s ability to remain in paid work.

The risk is that if reducing the impact of the pandemic is not prioritised, the result will be huge numbers of women at best being passed over for promotion or at worst losing work – neither is a good outcome, either for women, the organisations they work for, or the country.

Could there be a Silver Lining?

If we think ‘outside the traditional box’, and to use the current parlance create a ‘new normal’, the pandemic could offer a unique opportunity for the UK to implement a new approach to tackling employment inequalities for women.  This should include aggressive action on equal pay and the gender pay gap.

In its Equal Pay Day report for 2020, The Fawcett Society outlines steps the government could take to make sure all women are supported as the UK recovers from the pandemic.  These include legislating to make flexible working the norm, protecting pregnant women and new mothers from redundancy, implementing mandatory ethnicity pay gap reporting (in recognition of the fact that race plays a role as well as gender) and modernising equal pay legislation by introducing the right to know (where women are entitled to ask what a male colleague doing the same work is paid).

We owe it to ourselves to be agents for change.  We must not sit back and let the pandemic become a disproportionate disaster for women and in particular mothers.  If we don’t take action now, later may be too late.  Let us all make one of our New Year resolutions to take action by lobbying our MP, to push for the changes the Fawcett Society outlined in their report and for the Chancellor of the Exchequer to take seriously the warning by the International Monetary Fund to use the full power of the tax and spending regime, to create the right conditions and incentives for women to work.

Don’t want to do it alone!  Join a lobbying group dedicated to women:

Visit the National Alliance of Women’s Organisations list of members